I was watching First Take this morning and they were talking about Bills GM Doug Whaley, who commented recently that football is "a violent game that I personally don't think humans are supposed to play." That, coupled with Le'Veon Bell again calling out the Bengals, claiming that there are certain teams who have set out to intentionally injure him, and you have me sitting here as a mom wondering why I'm encouraging my seven-year-old's love of the game.

ESPN analyst Stephen A. Smith explained it most clearly, I think. He said, "let's not act like what he said, he's off his rocker. He's not wrong, we just don't care, because we love the game too much. And we're willing to stomach all the risk that comes with it. But he's not wrong with what he said." At the very foundation of the comment, there is truth. Were humans designed to withstand the impact and force that comes from athletes of this caliber hitting each other? Absolutely not. We know this. We've read about the concussions, and the crippled players, and the death of young kids who thought they were invincible and took a bad hit. Humans were not designed to play football. 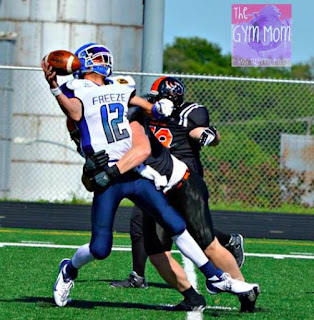 So here's the question, and I've asked it before, but can I know these things and still let my boys play the game? They watch their dad play, and want nothing more than to be on the field just like him. Although at this point, A wants to be a quarterback, not a receiver (he told me, "I already have the arm for it, mom" - and maybe the ego for it?). I'm trying to convince him that defense is the place to be. If I have to choose between my kid getting hit or being the one who is doing the hitting? Of course I want him to play defense.

So if we weren't designed to play football, then what? Skip Bayless today said, "it's a hard game... the combination of skill and guts... is why I'm such a fan of the league." I 100% agree with this statement. Football is a special combination of grace and power that is incredible to watch. But when you have people like Mike Ditka and Adrian Peterson and Brett Favre saying the don't our wouldn't want their kids to play, you have to realize that making the choice for yourself is one thing, but thinking it through as a parent is another story. Not everyone is meant to play football, of course. It's hugely physical. It's cerebral. It's brutal. Coach Herm Edwards said this morning, "There is a mentality. You know it at a young age, you know. You know at a young age. The more you play, you get to decide... You got talent, but at the end it's your will. It tests your will."

Whaley isn't wrong. Smith isn't wrong. You know that when you walk out on the field, there will be risks. Even at an elementary or middle school level, there are risks. Of course there are risks in any athletic activity - we let our daughter flip upside down on a 4-inch beam. But you train hard, you train healthy, and you eliminate as much of the risk as you can. Preparation, mentally and physically, are hugely important to injury prevention. So what do you think? How do you prepare, and is it worth it?
Posted by Leslie Pralle Keehn at 12:35 PM