One of the things we've been working on at our house is figuring out how to do chores. We only have the older kids every other week and I've always preferred that my kids just do what I ask versus have specifically assigned chores. I also struggle with the concept of an allowance, because I feel like doing your part at home is just something you should do. But I also like the idea of teaching kids to value money and thinking about earning and saving. 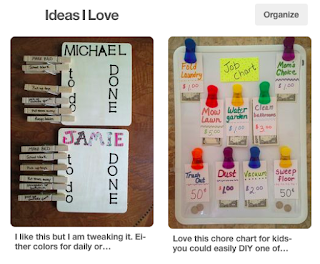 I started my research on Pinterest, like any good millennial mother would do. 😉  I found two ideas that I particularly liked for format (pictured to the right, link here), and then started looking at ideas for age appropriate chores. There were a lot of ideas, but finding age appropriate chores for my 4 year old was kind of tough - I'm totally open to your suggestions! I knew I wanted to combine the two in some way, because it gave me both things that I'm looking for. It gave the kids a list of items that they were expected to do because they should help out around the house, and it gave them a chance to do extra jobs to earn some money for things like vacations, shopping, or book orders.

My next step was to go to Amazon. I ordered a large white board/bulletin board combo. This one is a little pricey ($42), but it was a decent price for the size, and came with markers, magnets, and pins to get me started, along with all the mounting materials. Since it was large and a different format, I knew I couldn't do the clothes pin idea. I decided to use magnets, instead. I found some really cute push pin magnets, threw some extra markers in my cart, and called it good. 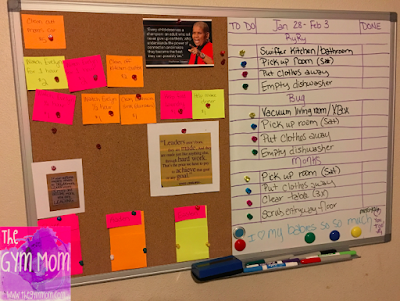 I decided on 4 chores for each kid, although with the space I have I could probably go up to 5 per kid. Until I add the baby... I used notecards that I had from school, cut in half, to make the extra chore cards. I write the chore and the dollar amount on them, and when they are completed the kids stick the card in their pocket at the bottom. I made the pockets out of notecards, but those old library pockets would have been awesome! At the end of the week the kids receive the amount that they have earned.

We put in a couple of rules. The first rule is that "watching the baby" has to be done when an adult asks you. The times that you just play with the baby for fun do not count toward earning money. I use this one when I have housework or a workout to get done. That way I'm around, but can focus on some of those daily tasks that need to be accomplished. We also talked about whether or not you could do "money chores" before "required chores." I decided that for now, the answer is yes - unless it gets abused. Some of their chores have a "due date" on them - like helping to collect the garbage on Thursday night or making sure rooms are picked up on Saturdays. It didn't seem fair to give them a chore late in the week and not let them earn any money until then. For now, we haven't had any issues.

We chose to hang ours up in the kitchen since it's a central location. I also added some meaningful quotes and a space where I can write them messages at the bottom. I like the colorful pins and notecards because I think it keeps it a little more fun. The kids like to compete to see who can get their chores done first, and Monkey thinks it's awesome to get to move his magnets!

I'm super excited to keep using our chart, and it's working well for us, but I'd love to know how you organize for your kids, or what types of chores you have them do! I'm always looking for new ideas!
Posted by Leslie Pralle Keehn at 9:23 PM