We didn't have a long trip planned in Estes, so we wanted to fit in as many sights and experiences as possible. On day two we planned a trip into Rocky Mountain National Park before our dinner at the historic (haunted?) Stanley Hotel. Across the road from Della Terra is the Rocky Mountain Gateway gift shop and Trailhead Restaurant where we picked up gifts for the kids and breakfast before driving into RMNP. We drove around, taking random lefts and rights, taking in the views and catching photos. Eventually, since it was March, we ran out of road. We were around "Many Parks Curve" when we found a place to park and got out to walk along the road for a while. I even decided it would be a good idea to hike off the road and up the side of a mountain for a little ways. The weather was beautiful, but I was definitely not dressed for hiking in my Rampage sweatpants, sweatshirt, and KMart "Ugg" style boots. It wasn't long before my pant legs and boots were water-soaked.

We went back to the car, went about 100 yards to another lookout, parked, and followed a boardwalk around the curve to take in more views. We stood on the boardwalk, agreeing that Long's Peak was one of our favorite views of the trip. After establishing that I was getting cold (remember, mountain wind and wet clothes), Shon stopped me as I turned around, got down on one knee, and asked me to be his wife. He told me later that he had a big speech plan, but when the moment came all he could think was that he just wanted to hurry up and ask me so I could say yes. I confessed later that the first thought in my head *might* have been, "Do not drop that ring over the side of the mountain." After the obvious answer of yes, we asked another group to take our picture. Because the world is tiny like that, and the world of Iowa is even smaller, it turned out that the woman who took our picture had previously recognized Shon's Des Moines county plates in the parking area - she was from Mount Pleasant, just down the road! Remember those Rampage sweats that were not ideal for hiking? Let me tell you, if I had to do it over again, and I knew I was going to be getting engaged, I would DEFINITELY choose a different outfit! Although... Sweats and a messy ponytail and he still wants to marry me? That's probably a good sign. ;) 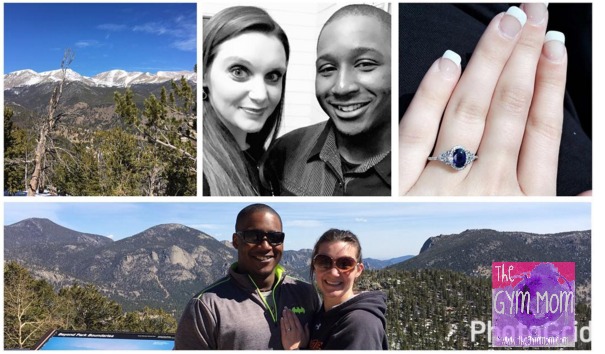 Our RMNP trip was cut a bit short - there's no cell reception in the park, and clearly at that point my priority was sharing our exciting news with everyone I knew. After calling the kids and asking their permission to marry Shon, and messaging all our closest friends, we went back to our suite to get ready for dinner. 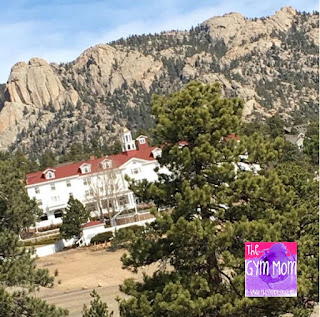 If you've never experienced dinner at the Stanley Hotel in Estes Park, I would definitely recommend a visit. While a bit pricy, the food was excellent, and the atmosphere was what I was looking for in a "nice" restaurant - not too stuffy, but more upscale than we would typically go to at home. It was worthy of dressing up. My only complaint, if you can call it that, was that other people didn't necessarily feel the same way. So while I was looking forward to a dinner where I could wear my new dress (as were most other patrons), others felt as though jeans were appropriate. Not that others' clothes should affect my evening, but it did detract a little bit from the ambiance I was hoping for. The service was great, and we had our pick of local game meat and craft beers to choose from. It was the perfect way to celebrate our big day. It was also the perfect way to get another picture of our engagement day so I could ditch the sweats and ponytail!
Posted by Leslie Pralle Keehn at 11:01 PM