The first defensive football player I ever fell in love with was Bob Sanders. It wasn't long before Tyler Sash was added to the list. Both former Iowa Hawkeye standouts turned NFL safeties, it's not surprising that these guys captured my attention. A safety is a leader. A safety sees the big picture. A safety sees a challenge and rises to the occasion, sometimes the last man standing between an opponent and a touchdown. On top of that, a safety will make wicked cool plays like Sash's three interceptions against the Cyclones in 2009. So almost as quickly as I fell in love with Sanders, and then Sash, I purchased my Colts Sanders jersey (okay, maybe more than one). When Sash joined the NFL and launched his #GBNB brand (short for Get Better, Not Bitter) to raise money for his foundation, I was a frequent customer. So while Sanders holds a place in my heart as a Hawk and a Colt, Sash found a way into my life on a different level.

While shopping the #GBNB gear Facebook page, I'd come across stories of how he modeled his life after this motto his dad shared with him. The idea is that we all have choices in life; we have the chance each day to get up and be better than the last. It is a motto of perseverance; grit; determination. Over time I have given away dozens of wrist bands emblazoned with the #GBNB logo, including using them as gifts for an entire group of graduating seniors. You never know what obstacles you're going to face, but you'll come out stronger for it.

News of Sash's passing earlier this week has left me saddened, a little shocked, and definitely reflective. It's funny, the kind of impact a person that you've never met can have on you. As the entire state (on both sides of the rivalry) mourns the loss of a great player and a great person, it's not the Super Bowl championship, or the interceptions, or the records that any of us will remember. Instead, we'll remember the community outreach, the supportive teammate, the friend and family member.

Sash's life may have been short, but he impacted more lives than many people ever hope to. His legacy and memory have united an entire state during a week traditionally filled with all kinds of trash talk and hard feelings. With Sash in mind, we'll all keep working to #GBNB.
Posted by Leslie Pralle Keehn at 6:00 AM 3 comments: 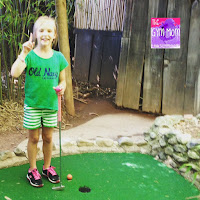 One of my favorite parts about staying outside the city with family is that we have the opportunity to check out some different, more relaxing activities beyond the typical “go, go, go” mentality of being in the city. Burke has a lot of great little places to eat and shop, but we found a few places to be particularly fun – and probably something you could do in many suburban communities around the country. 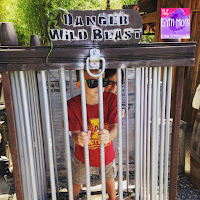 All four of us and Uncle Mark were able to boast a hole-in-one this year. Kayo didn’t have one this time, but last year I was the only one without a hole-in-one, so she and I are about even now! 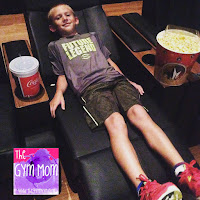 We also hit up the Minion movie while we were in town. This seems like such a simple thing that we can do at home, but when we have a toddler around, it’s not always easy to get away for a movie night with both mom and dad in attendance. The kids swear they will never watch another local movie again. The seats were full on leather recliners with footrests and giant arm rests. It was insane, so comfortable, and so much fun to give them that new experience! 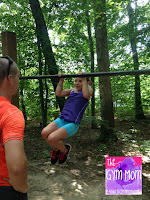 The highlight for me, though, was the local park. Burke Lake Park is home to obviously a lake, but some great trails, a train, a carousel, mini golf, an ice cream shop, Frisbee golf, parkour stations along the trails, and probably a whole lot more that we missed while we were busy working out. At the time, the kids were training for the Iowa Games, but our family runs quickly rose to the top of my “vacation favorites” list. Living and modeling a healthy lifestyle for our kids is one of the best decisions and parenting choices J and I have made for our family. I’ll never forget those moments, and I don’t think the kids will forget their 5 mile runs or first parkour experiences any time soon!