I'm home from school, it's time to play Madden.
It's bed time? Oh, well can I at least watch the game until half time?
It's after half time? Oh... well, I wasn't tired. What's the score?
Can I watch a movie before bed? Okay, I'm going to watch the TO special online.
It's Sunday, I'll be in the living room playing catch and watching football.
Mom, did you know Vontae Davis went to school at Illinois?
Mom, did you know Peyton Manning plays tomorrow? 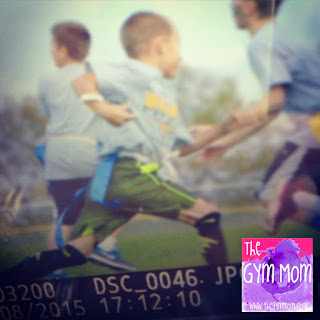 Welcome to my world. I've lost my little boy to football. Sure, he's always liked it, but over the last year he's become more and more invested in every aspect of the game. Husband gets tired of answering his questions, I think, but I think it's adorable that he wants to know everything he can. And of course, trying to be just like his dad, he has his little heart set on being a wide receiver. I'm still working on convincing him that it would be much more fun to be a corner, and he told me he had a lot of fun playing safety during flag football, so maybe I'll end up with a rockstar defensive back after all. With one year left until he can play true youth football (are there even any 3rd/4th leagues around here still?), I can't imagine how the obsession will grow.

One of the things that has come up more and more frequently in the news, though, is the safety issue that comes with football. I've had several facebook friends mention that they would never let their son play. High school teams are declining as "feeder systems" decline due to not only safety concerns, but competition from other sports. Do I not let him play until he's older? Or do I encourage him to learn how to play safely from an early age? Will advancements in helmets come far enough, fast enough, that I won't have to worry? What about tradition? After getting to watch his dad play last summer could I keep him away from "following in daddy's footsteps" even if I wanted to? I think watching R flip upside down on a 4in beam is slightly terrifying, how will I feel about my baby boy being hit? And then, of course, there are all the concussion studies...

I can't picture myself ever telling A he can't play football, but I'm curious about the people who have made that decision for their children. Especially those who played themselves. Do you/would you/will you let your son play? Why or why not?
Posted by Leslie Pralle Keehn at 10:28 AM No comments: 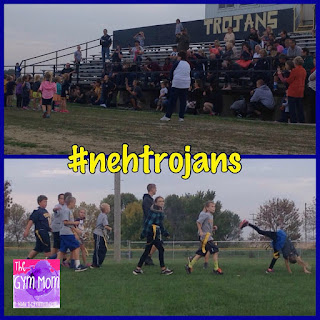 This year the kids' school is an elementary only building instead of a K-12 building. The 7-12 kids attend school in another district. After riding an emotional roller coaster for years now, the parents and staff have set out to make the elementary the BEST elementary it can be. They've started planning family activity nights and offering after school sports. Right now they're playing volleyball, but in September they offered flag football. Husband volunteered to coach, and A got to play. What do you do when you start offering rec sports after school for your students? Host your own homecoming week, of course!

Earlier this month the kids had all their dress up days, and on Thursday night they played volleyball and played an exhibition flag football game. It was a blast, and you can see from the photos that Trojan pride still runs strong, but bleachers and sidelines full of fans who came out to watch the kids play and enjoy the free hot dog dinner! Being a Trojan isn't about the age of the kids on the field, it's not even really about the sports or the school. It's about the community that comes together to make something great happen. So thankful that my family gets to be part of that experience.
Posted by Leslie Pralle Keehn at 10:03 AM No comments: 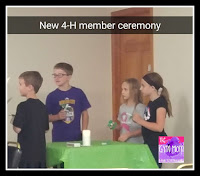 Just like last year when I had no idea how to be a wrestling mom, this year I'll be a 4H mom! I was not in 4H, though my sisters both participated briefly. My husband, however, was a big time 4H-er. Last weekend while I was at a conference he and R attended her first 4H potluck, and she got to be part of the induction ceremony for new members. Here's to hoping that a) we can successfully juggle another activity, and b) my friends who are already 4H moms or who participated growing up have lots of helpful advice for me!

Were you in 4H? Do you have kids in 4H? I'd love to hear about your experiences and any tips you have for a first-timer!

This summer when I wasn’t on the road I spent a pretty significant amount of time being a gym mom. One of the highlights of my summer, I thought I’d create a list of what made it so awesome. I came up with six things that made my gym mom time pretty epic, and that I think you would enjoy if you had some time to kill in Ames

1.   West Towne Pub. There aren’t a ton of places to eat in west Ames, but West Towne Pub is conveniently located and has delicious appetizers. I enjoyed more than one Bloody Mary there this summer, which I would definitely recommend. If you’re hungry, I recommend the jalapeno poppers or the sweet corn bites as favorites. You really can’t go wrong with cheese balls, and they have some excellent burgers! Make sure you ask for extra straws.
2.   Sun Tan City. My lovely friends were giving me a hard time at the beginning of June for being so pale, and I while I know that it’s not the healthiest choice in the world for my skin, the 12 minutes that I spend alone and warm in the tanning bed are often a highlight of my day. Since it’s a national chain, I was able to tan while I was in Lincoln, NE for camp, and I regularly go to Ames, Mason City, and Fort Dodge because of my travel and work schedule.
3.   TJ Maxx. Shopping. I love shopping. I also love a good deal. I spent more time than my husband really would have liked stocking up on new clothes for work and working out this year. Fortunately, since it’s TJ Maxx, I was able to do this without spending a ton of money. So see, honey? It was really a smart decision to take advantage of the savings…
4.   Café Milo. Another local favorite on the west side of Ames, the large chai latte became my best friend this summer. When I was traveling I was able to start my morning with Starbucks almost every day. When I came back home my body went into shock without my morning drink. Luckily, Café Milo was there to step in. They have some good lunches, too. I had a great grilled cheese with spinach and tomato one day that I would eat again, and their breakfast sandwiches were often a staple for our mornings.
5.   Ada Hayden Park. It wouldn’t be much of a gym mom summer without putting on the miles! Walking, jogging, intervals, handstands, hiking… We find ways to make it interesting. Unfortunately we didn’t get in the kayaking that we’d hoped, so if anyone has any info on kayak rentals, you should let me know. And of course you put in the hard work of doing loops at Ada Hayden so that you can eat cheeseburgers. See #6. 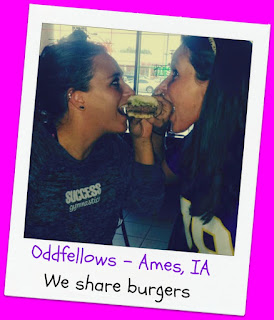 6.   Odd Fellows. Several months ago, upon hearing about my obsession with “weird” cheeseburgers, one of my co-workers suggested I try Odd Fellows Burger Kitchen in north Ames (just north of the mall). I finally made it in with a fellow gym mom. I should never have waited so long. Their spicy mac and cheese cakes? Ah-may-zing. But their bacon/jalapeno/pepper jack cheese bites? I could eat them every day. And then I would ask for more. Can you tell I love appetizers? On the burger side, my favorite so far has been the Thai peanut burger, but it’s not actually on the menu. The guacamole burger is good, and I enjoyed the Elvis Presley peanut butter burger as well. I haven’t gotten up the courage to try the donut burger yet (the donut is the bun). Not because it’s scary or even weird, but because I’m not a huge donut person. Usually we'll order two different burgers that sound good, cut them in half, and share!

Now that it’s fall and we’re back on a regular schedule, my life has to be much more focused on balancing kids and home and work, so there’s less time to “play” – but you can bet I’ll be visiting these places when I can, and I’ll definitely be back next summer! Husband would probably say I still find plenty of time to visit most of these places...
Posted by Leslie Pralle Keehn at 9:21 AM 1 comment: