Catching Up With My Boys

While we're running around with work, R's gymnastics, and dealing with her injury, I've tried to make extra efforts to catch up with my boys. One of the things I wish I was better at is nurturing the relationships I have with my children as individuals. In the world of chaos and time crunch, I try hard to be a great mom to my kids, but I also want to have good relationships as "Mom and R," "Mom and A," and "Mom and E."

Take time with each of your children individually. Appreciate their personalities. Embrace their passions. R and I get a lot of bonding time on the road to and from the gym, or to and from the doctor, but I also need to be better about building our relationship outside of the gym schedule. Of course, sometimes it's easier to bond with my daughter, but I love the things I have in common with each of my babies. I'm going to keep working to embrace them as individuals, and I hope you will, too. It's not about being the best mom (or dad), but about being better than you were yesterday, the best you can be, and the best for your kid - remembering that that may look different from the neighbor next door, and even different from child to child.

Posted by Leslie Pralle Keehn at 7:30 AM 2 comments: 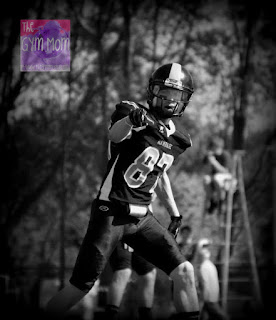 I spend a lot of time writing about raising my kids and the role that sports plays in our lives. Well I don't know if you've heard, but rumor has it that at some point they're going to grow up. I'm not a fan, and I would stop it if I could, but since I can't, I hope that they find a sport (or hobby or some other passion) that they are so passionate about that they can hold onto it well into their adult years. Something that challenges them, comforts them, drives them.

With that in mind, I set out to talk to some real-life grown ups who are still finding happiness in the childhood sports that brought them so many memories, life lessons, and triumphs. I'm not talking about your typical weekend softball tournament or casual round of golf, I'm talking about athletes who train and compete at intense levels in order to hang on to something they love.

I figured I'd start with the husband. Husband has always been athletic, playing softball in the summer (and fall), basketball once a week in the winter, maybe hitting an open gym. He golfs in the occasional tournament. But last summer he joined a group of guys to play football. Legit tackle football with the Midwest Rampage. At 34 years old (now 35). As a father of three, educator, and fabulous husband (I'm not just saying that because he'll read this - I'm super needy, and he handles that well), what would lead someone to play a game where they are going to not only be sprinting around a field, but getting hit by big dudes?! Time for an interview.

Me: When did you start playing football?


Husband: I started playing padded football in 7th grade, but I played with my friends long before that.


Me: What is the best part? Why did you play? 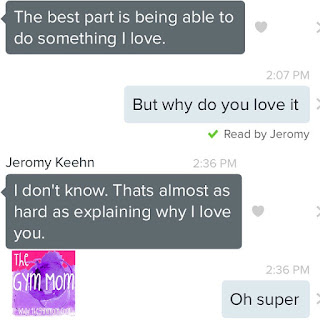 Husband: The best part is coming together to accomplish a goal as a team. It's different than any other team sport because it takes a whole team almost every play. The line has to block, the QB has the throw, the WR has to catch. They all have to come together for it to work.


Me: What is the general reaction of people who find out you're still playing? Do people think you're crazy?


Me: So why do you still play?


Husband: I still play because I love the game and while I knew I was never going to play in the NFL, I always regretted not at least trying to play Arena Football or something. This has given me the chance to eliminate that regret. But more importantly, I play for the Rampage because it's different. I knew these guys for 3 months, but knew then that some would be lifelong friends.


Me: What would you say is the biggest life lesson you've taken away from football?


Husband: The biggest life lessons are being accountable and understanding that everyone's role is important. Football is the ultimate team game. Everyone has to do their job for things to go right. One person doesn't, and everything goes wrong.... tackle for loss, sack, turnover, whatever. But you also need to understand that everyone's role is important. I had some good games in high school, but the first people I always thanked were the linemen. They never get the credit they deserve, but without them doing their job, I can't do mine.

Five Ways to Cheer Up Your Injured Athlete

With R stuck on crutches and in a brace with her knee injury, we've been looking for ways to keep her spirits up. Dealing with an injury is tough for anyone, but going on 7 weeks with no end in sight, I've been scrambling for ideas to keep her going. Right now she's doing fewer hours at the gym and focusing on upper body conditioning (and abs), which isn't always a lot of fun. Especially when your teammates are working on new skills. Don't get me wrong, she's working hard - taking it like a champ, but I've still been trying to help her focus on fun. 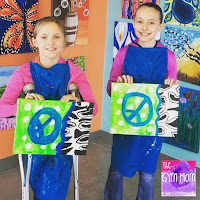 1. We signed her up for an art class with a friend! You know, the kind where you go and drink wine and they help you look like you know what you're doing? Like that. Except without the wine, obviously. R love art, and while her team was rocking it out at the Chicago Style meet, she and a friend from school created some lovely canvas paintings at Creative Spirits in Ames.

2. Presents never hurt. Now I'm not huge on spending tons of money on things my kids don't need, but I found a pair of shorts at Justice on clearance that she'd been wanting for a while, and picked them up. This also might have been an "I'm sorry I didn't really believe you" present.

3. Family time! We've been doing lots of family activities! For example, this weekend we had brunch with my mom and sisters, watched J practice with his football team, and went out to dinner with my in-laws. What better medicine can there be than surrounding her with people who love her?

4. Books! Since she's sort of stuck - having inside recess, not being able to go out and play in the snow, etc. While A has been engrossed in Diary of a Wimpy Kid, R has really taken a liking to the Dork Diaries (which I had never heard of before J picked one up at the Scholastic book fair at school). Yay for libraries! She's also spending a lot of time on her devices, so while I'm cool with some Netflix, YouTube Kids, and Minecraft, I'm glad she's found some new reading material, as well.

5. Plan something epic. For us right now it happens to be a 10th birthday party that's only a few weeks away, but we've also talked about an "I'm all better" outing with friends. She was really hoping for an American Ninja Warrior party, but since even if she's 100% healed (which isn't looking likely) she'll barely be off crutches by the time her party comes around, we opted for an aerial class (think silks, hoops, etc) - something that wouldn't be putting impact on her knee. Maybe we'll sign her up for ninja warriors with friends after she's healed.

What would you add to the list?
Posted by Leslie Pralle Keehn at 11:43 AM 3 comments:

Last weekend R was showing off some strength and flexibility skills in the living room (we had a visitor for lunch - pretty sure that had something to do with it), and after a few tries was able to complete part of her press handstand. I guess all that conditioning is paying off!