I am so excited to continue my "All Grown Up" mini-series, a look at adults who still compete and perform at high levels in their respective sports, with this interview with Midwest Rampage linebacker and Carlisle Middle School principal, John Elkin! While John and I worked in neighboring school district for a few years, it wasn't until husband joined the Rampage last year that I got a chance to get to know him. What I found out is that Elkin brings a special style of leadership, focused on passion, accountability, and teamwork, to both the field and to classrooms. Enjoy! 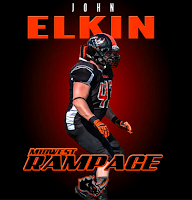 Give me your "football timeline"

The first time I ever played organized football was in 5th grade at Grant Wood Elementary school; it was a fun experience and I can still remember the one time I almost scored a TD as a QB but didn't.  I didn't play again until 8th grade and remember it wasn't until like the second game that I realized (after a teammate educated me) that the pants actually had pockets in them for the pads.  The next year as a freshmen in high school, I wasn't even going to play football--I actually slept in on the first day of practice and was like, "Ehh, I'm going to sleep in the last two weeks of the summer.  That was until my longtime friend Russell Elk came and got me at noon and was like, "You're playing, let's get going."  So, from 1986-1989 I was a Bettendorf Bulldog and that entire experience was very defining for me because BETT is a very special place to play--because of the program, coaches, and fans.  I had some great mentors in high school such as Dave Donohoo (who was a year older than me) and coaches John Lavelle and Randy Scott.  My experience in high school, especially after we won the '88 4A state championship (and by the end of my senior year, 36 straight games from '87-88), gave me the desire to play at the next level. 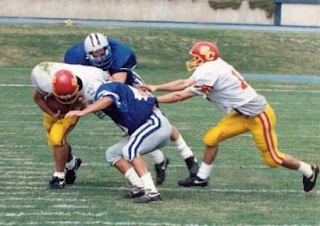 Collegiately I played at Drake University from 1990-94 where I was a 4 year letterman/3 year starter.  However, I would classify my college career as "up and down" because it seemed like I always had a nagging injury (e.g. foot, sports hernia) that while they didn't keep me off the field, I was never 100%.  Again, I had great mentors and fellow teammates at Drake such Kirk Nelson, Scott Sullivan, Dave Prymek, and Todd Sauer.  I owe a big thanks to Coach Joe Hadachek because he recruited me out of high school and not only took care of me at DU, but is still a presence in my life. My senior year was cut short as I missed games 2-8 when my fibula got broken for me (thanks Peck!) and while I was able to come back and play in the last two games (with my very last play being a tackle and forced fumble), my career felt unresolved (due to the injury my senior year).
What then happened was that 13 years went by with a lot of dreams about still playing happened before I "unretired" in 2007, thanks mainly to Brian Miller who kept after me to "...have a great time playing semi-pro football."  So, from 2007-09 I played for the Iowa Eagles before a core group of us decided to form our own team in Webster City and from 2010-present I've been bleeding Black and Orange for the Midwest Rampage.  For sure, the last 9 years has been a blast and has had both up-and-downs ranging from the '07 season of going 0-11-1 to the '11 season when we went 7-4 and played the Des Moines Blaze for the MFA title...  plus you throw in the last two years of going 15-5 and two advancements to the SPFL Semifinals, and wow... time flies.


What is the best part about playing?

Several things.  Of course, playing instead of watching or coaching is the best part, but for sure the friendships and fellow brothers I have made the last nine years--guys that I never would have known without putting on the pads again.  Also, the general locker room/team camaraderie that forms when you literally sweat, bleed, and have tears of joy and sorrow with guys committed to the same mission as you.  Finally, I would say there is NOTHING like standing on the sideline before a game, in full pads, when the National Anthem plays before the game... that's for sure the best part. 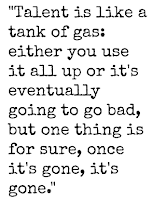 What has been the biggest life lesson you have taken away from football?

The biggest life lesson I have taken away from football is that it's not about giving a hit that matters, but whether or not you can take a hit.  Life is like a fullback iso lead play:  It's all about stepping up in the gap and taking on the fullback that's coming for you.  And it matters not if you get knocked down, but if you get up.

Why, in such a high impact sport, do you keep playing now?

Quite simply, because not only do I love playing the game, but even at my age I still can.  I don't fish, hunt, or play golf, and while I do realize that I have less games in front of me than behind me, the words of my high school head coach, Merv Habenicht, still ring in my ears as one of the last things he ever said to me was:  "Talent is like a tank of gas: either you use it all up or it's eventually going to go bad, but one thing is for sure, once it's gone, it's gone."  So, to that end, I plan on using every last drop football that's in me.


What made you want to run a team versus just play on one? 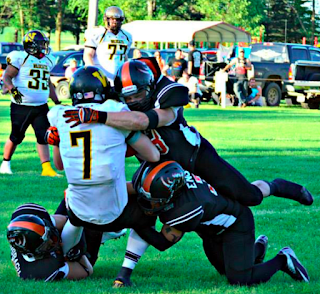 Well, when the Rampage was formed (originally by myself, Miller, Andy Sowle, Chris McNiel, Jared Bell, and Jerry Mosley), I was voted as the Team President/CEO because as Miller said, "Nobody else is better suited to do it than you."  (Now, I'm not sure if Miller was being honest or just trying to put more things on me LOL).  My career as an English teacher, coach, and now administrator has brought out, taught me, and given me skill sets that have proven to be useful when it comes to running a team and include being organized, communicative, goal-driven, and team-focused. The Rampage played from 2010-12 before the Board of Directors decided to shut the team down, so there was no '13 season.  However, after a bunch of us played in a game for another team as mercenaries, the desire and interest to restart the Rampage existed so here we are... about to play in our second third act since 2010.

Posted by Leslie Pralle Keehn at 7:00 AM